I visited Bratislava in 2009 with two friends for a snowboarding trip in the lower tatra mountains, near the small village of Liptovsky Mikulas. We flew into Vienna in Austria because it was cheaper than flying into Bratislava and only a short train ride across the border.

Once arriving in Bratislava we walked the short distance to hostel Pollonium, which – bizarrely – is themed after the movie Hostel which was set in Slovakia (although apparently filmed elsewhere). As a result of this movie and a general perception of eastern europe as being dangerous, tourism to countries like Slovakia hasn’t flourished – which is not only a complete misconception, but is also great because I would hate to have to fight through the kind of crowds you find at the Eiffel Tower while exploring the beautiful city of Bratislava.

It was the middle of winter so everything was covered in a blanket of snow as we wondered about exploring beautiful old buildings, riversides and deserted streets. As evening descended we popped into a welcoming looking bar which was completely empty and quickly made friends with the staff. In between games of pool they introduced us to real

Slovakian absinthe (not the fake stuff) and after a few shots and a couple of pints they told us (through admittedly slurry and broken English) about a party that was happening that night in an abandoned World War II bunker! Since we had no other plans we followed them through the dark streets to a hill on the riverside and true to their word we discovered a bunker carved deep into the hillside with pumping music and lights emanating from inside!

Once inside we were greeted with one of the best underground venues I’ve ever seen – super old vaulted ceilings with bars and chill areas hidden down dark passages, graffiti and various artworks adorning the walls, lights and UV everywhere and a huge mainstage decked out with an incredible soundsystem! We drank, chatted and danced for a few hours to a pumping electro band with a beautiful Slovakian girl singing in, well, presumably Slovak. 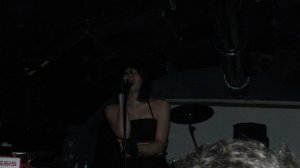 Around about 3am I was exhausted and told the guys I was going to head home, which luckily I somehow managed to do alone in my inebriated state. I believe they followed soon after.

The next day unfortunately we had to head off early to our snowboarding trip, so we didn’t get to see much of Bratislava, but if that experience is anything to go by I will definitely be back!