A Wedding in Watamu, Kenya

In March 2016, my cousin got married in the beach resort town of Watamu, Kenya.

I only had a week off work, which was enough time to see most of this tiny fishing village, but I could have easily stayed another week!  It is one of the most beautiful and relaxing places I’ve ever seen.  Truly heaven!

I was staying with my parents and my brother and his girlfriend, as well as another couple who we didn’t know but were guests of the bride and groom.  We all rented a huge, mansion like house just off the beach, with four double bedrooms, a huge living area, bar, kitchen, massive swimming pool and amazing outdoor lounge and sitting areas.  It even had an outdoor bed next to the pool!  And all this for a very affordable price, being that the exchange rate in Kenya works out very favourably to the British pound.

Most days were spent lounging around the pool, walking along the beach and generally just eating, drinking and relaxing. Proper holiday style!

We did a few activities, like snorkelling, paddleboarding and riding around on the back of incredibly scary motorbike taxis that weave in and out of traffic and ride with wild abandon along rocky dirt roads.

One of the best days was spent out on a small “glass-bottom” boat – the glass-bottom was only one very small, dirty square meter of perspex in the bottom of the wooden boat through which you could see very little.  However we had no need for it as we spent most of the time in the water around the boat, snorkelling with the free snorkelling gear the boatmen provided us with.  The water was a bit murky from all the sand kicked up by the boat motors, but I managed to see quite a few colourful fish and coral gardens. 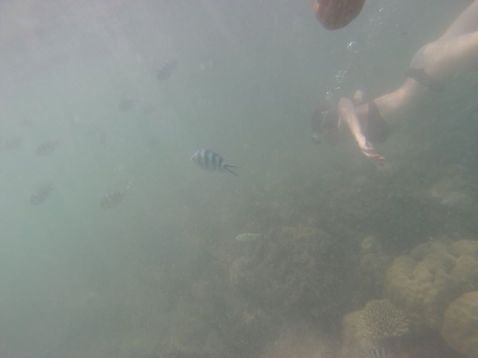 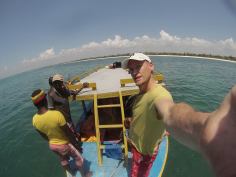 The day before the wedding we visited a lovely, more deserted beach slightly north of the house.  We travelled there precariously on the back of a small rickety motorbike taxi, up some rocky dirt roads that I would struggle to drive a 4×4 up!  Luckily nobody died and we were rewarded with the most incredible white sands and blue seas I have ever seen.

We walked quite far out into the shallow ocean and took some pictures sunbathing on a sand dune.  At one point someone dropped my phone in the ocean but luckily it’s a waterproof Xperia z3 and I was pleasantly surprised at how well the waterproofing actually works!
After getting sufficently sunburnt, we enjoyed an amazing meal of fresh fish and seafood in a tiny little wooden restaurant presumably run by the local fisherman.  Amazing they even had cold beer and wifi!  Although the toilets left much to be desired…

As you can imagine in a small fishing village the nightlife isn’t expansive, however we managed to find a few bars with a bit of a vibe, the best of which was the infamous Pole Pole Bar (pronounced Poly Poly).

It was a bit dead the night we went and they were playing mostly awful radio pop and oldskool tunes, but amongst the eight or so of us we managed to get quite a dancefloor going!

That evening I finished off same as most others, lounging in the pool drinking Auchentoshan whiskey and watching the stars.  It’s so hot the pool water was still warm at 7am every morning!

The day of the wedding went smoothly, with excellent weather, clear blue skies and only a slight breeze.  The ceremony was performed right on the beach under the palm trees and next to the softly lapping waves, in what must surely be the most beautiful wedding venue I’ve ever been to.  A small arch was erected for the bride and groom and the 20 or so guests were provided with sarongs to sit on the sand.  After the many touching speeches and formalities of the ceremony, it was time for the real reason people go to weddings – the reception!

We all piled into tuk-tuk’s and were whisked off a few kilometers to another huge lagoon-side mansion where my cousin and her family were all staying, and where the dinner and wedding party were to take place.  It was a stunning setting, all outdoors with white tableclothes set around a beautiful swimming pool and catered by a huge seafood buffet.  I drank and danced until inevitably ending up in the swimming pool, losing my shoes and yet somehow waking up in bed the next morning, albeit still wet. 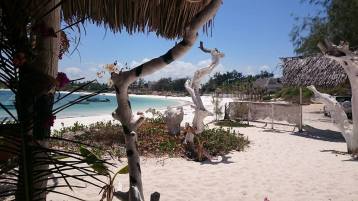