My friend Magnus, a DJ from Cape Town was playing at this festival so I decided to fly over to Germany for the weekend and check it out.  I enlisted my friend Jon to join me and we flew to Hamburg after work on Thursday night, hired a car and drove to a hostel in the famous Reeperbahn area (Hamburg’s red light district).

After a few beers we walked up and down the main area looking for a good strip club.  Most of them are rubbish and try extort money from you, but we managed to find a good one and one of the dancers gave us both a lap dance for the price of one!

The next morning we got up early and headed off on the two hour drive to the party.  We had to stop on the way to get supplies and I spent ages looking for a coolbox to keep ice and cold beer in, but we eventually got there and quickly setup our small tent that would be our home for the next 3 days.  Luckily the weather was fairly good, not sunny but not raining or cold.  We then went and explored the party and while sitting in the chill area a girl asked us if she could have a rizla, so we went and sat with her group and started chatting to them.  They were from Berlin but they all spoke English quite well and they were very funny, so we carried on partying with them and went back to their campsite.  Towards the evening my friend Magnus was going to be DJ’ing so we left their group and went to go watch him, and then we went backstage to party with him and another DJ that I also knew from Cape Town.  Backstage however was literally just the back of the stage, and not the sofa’s and flowing champagne I was expecting, so we stood around chatting there for a bit and then went back to the dancefloor.

Around midnight we were all partying back at our tiny campsite and I was tired and lay down for a little nap, but ended up sleeping all night.  My Cape Town friends had to leave because they were flying back to Cape Town the next day, and poor Jon couldn’t sleep so he was left on his own for the night. Sorry Jon!

The next day we started to try get more into the party spirit.  Which began slowly has we spent most of the day just lying around in the many hammocks, but that was quite fun anyway, watching all the random people.  We danced a bit and spent a few hours trying to find the elusive lake, without success.  Apparently you had to leave the party and walk about 10 kilometres down the road, so we gave up on that quickly.  Later on we met up with the other group again and partied with them all night.  At some point we all ended up back in their campsite, lying on inflatable mattresses and blowup crocodiles and just laughing and talking so much rubbish. 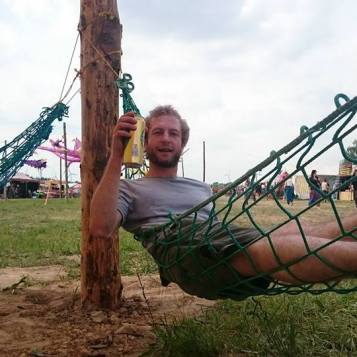 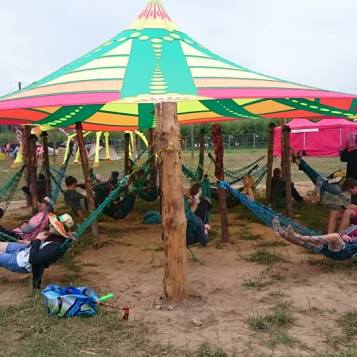 Eventually the sun was rising and we decided we better get some sleep if we want to enjoy the last day.  Our new friends had to drive home that evening but luckily me and Jon were only leaving on Monday so we could still fit in a full nights rest.  We headed off to bed and arranged to meet them later that afternoon.

We woke up sometime around early afternoon and found our friends again.  Everyone was packing up and looking a bit worse for wear, but we managed to all go to the dancefloor together for one last dance.  There we found a man trying to vacuum the dancefloor, and somebody selling balloons out of a wheelbarrow!  Good times!

We danced a bit until our friends left and then went in search of food and hammocks.  After the music on the main dancefloor ended we moved to the chill area for a bit, but by then the weather was turning bad so we retired to the campsite to sleep.  The next morning we packed up, grabbed some coffee and headed back to Hamburg