My Irish friend Andrew convinced me to come to Dublin with him to do the 2016 Dublin Marathon on the last Sunday of October.  I’m not huge into my long distance running but I’d never been to Ireland before and I’d always wanted to go, so it seemed like as good excuse as any.  Also if I was going to do a full Ironman one day, I needed to get good at running marathons!

We were joined by his girlfriend Frith and another runner Emma.  I flew out after work on Friday and landed in Dublin about 8pm, then caught the fast and convienent airport bus into the centre.  We had booked an airbnb just south of the city centre near to where the race started.  After dropping off my bag we headed out to a burger place called Bunsen Burger.  There I had the biggest doulbe cheese burger of my life, which didn’t fit in my mouth but taste

d like greasy cheesy meaty heaven.  Fortunately I was running a marathon in two days so didn’t have to worry about the few thousand calories I had just consumed.

Then we went to Kehoes, a pub with very good Guinness.  We had a brief confusing conversation with what must have been the drunkest group of middle-aged women I’ve ever met, who claimed to be in a band but who’s “manager” seemed to be the drunkest of all.  Fairly standard Irish craic… 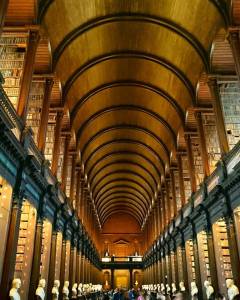 We spent the next day registering for the race and collecting our race packs, and then wondering Trinity College where Andrew studied.  He managed to get us into the massive library and Book of Kells exhibition for free and without having to wait in line, which was very cool.  The library is unbelievably huge, and houses a 600 year old harp.

There was also an interesting metal sculpture of the Earth outside which you could spin, if you were quite strong since it must have weighed a few thousand pounds.  For dinner we had went to a nice Italian place to have a pasta dinner to carbo load, and I also had a huge side plate of potatoes just in case!  Then before heading home we went to the Irish Film Institute which was doing a halloween festival, and watched possibly one of the scariest movies I’ve ever seen – The Autopsy of Jane Doe.

The next morning we got up early and had porridge and coffee.  I was surprisingly calm considering how little training I had done, and considering how tired and sore I felt after my last marathon a year ago.  We walked for miles to drop off our bags and had to run to our various start lines.  We were all running in different waves because Emma entered late and me and Andrew ran at a very different pace so he started ahead of me, although as it turned out he wasn’t feeling great on the day so I ended up passing him.

The race went surprisingly well for me – I basically just put my head down, got stuck into a solid 10km per hour pace and focused on my music.  At one point I passed a French guy running with a model of the Eiffel Tower on his back!  He looked pretty exhausted, understandably.

I finished the first half in exactly two hours and Queen’s ‘We are the Champions’ came on as I crossed the halfway line, so I took that as a good sign!  As predicted at about the 30km mark I started to hurt quite a lot and run low on power.  I knew that no amount of energy drinks or bars were going to help me here – if you haven’t

done the training then it just comes down to willpower to carry on.  Luckily I had my secret weapon – power ballads!  There’s nothing like a good, soaring power ballad to lift you up and carry along when you’re feeling broken!  I let The Rolling Stones’ ‘Ruby’ and Scorpions ‘Wings of Change’ carry me over the finish line, and made it in 4:08 – very narrowly missing the four hour mark, but still improving on my last time by 22 minutes and doing far better than I expected!

After stretching and collecting our bags we all met up to take some photos and congratulate each other.  Emma had finished in almost 3 and half hours, but Andrew had taken 4 and half as he wasn’t feeling great.  Then Andrew and Frith heading off with his parents to get lunch and me and Emma went home to shower, eat and recover.  And drink some well deserved beer!  We watched a few episode of Black Mirror until Andrew and Frith got back, then we all got ready to go out.  Monday was a public holiday in Ireland and we had all taken off work so could have a bit of celebration after the marathon.  We joined Andrew’s parents at a bar for a few beers and shots of XO Patron Cafe, and then moved onto somewhere else for a few more.  However, ulimately we were all too tired to party late, and ended up home in bed just after midnight.

The following morning we walked around painfully for what seemed like ages looking for somewhere to have breakfast.

Eventually we settled on a French place that did Bloody Mary’s, and then moved onto a pool bar that allowed you to bring you own drinks in, and even had a fridge for them!

After a few games Andrew and Frith had to head to the airport.  Me and Emma still had a few hours to kill before our flight home, so we watched another film at the IFI halloween festival, although this one was really rubbish.  So bad I don’t even remember the name… I think we mostly just wanted somewhere dark and comfortable to have a nap.  Then after a quick, obligatory visit to Temple Bar, we found a taxi and headed to the airport.